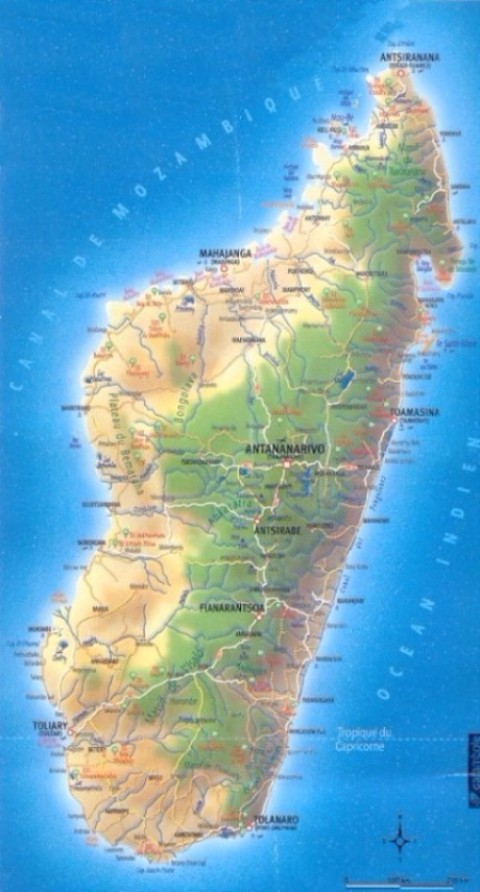 The island continent, the fourth largest island in the world, the red island, the place where cultures, traditions, nature, colours and perfumes are mixed in a cocktail with a multi-ethnic flavour!
Madagascar is geographically located in the Indian Ocean off the east African coast, 400 km from the coast of Mozambique, 10.000 km from Italy. It is a tropical island (crossed by the Tropic of Capricorn) but, given the considerable extension (over 1.500 km long), the landscape and climate are varied. With as capital Antananarivo, Madagascar has about 20 million inhabitants, with a density of 28 inhab./sq km. It is a democratic republic. The official language is Malagasy, but French is spoken almost everywhere in the country. The ariary is the currency that has gradually replaced the Malagasy franc.
In Madagascar there are 18 official ethnic groups, including: Merina, Betsimisaraka, Betsileo, Tsimihety, Sakalava (divided in turn into subgroups); there are also many communities of Indo-Pakistani, Chinese, Comorians and Europeans.
The prevailing religion is the animist one linked to traditional local cults dedicated to the strong bond with the dead. Some ethnic groups have a practice of re-burial called "famadihana" where the remains of the deceased are wrapped in new shrouds and placed in the sepulchres after a period of ceremonies. Following the animist religion there is the mostly Catholic and Protestant religion, and a Muslim minority.
Madagascar is home to 5% of the world's animal and plant species, 80% of which are endemic to Madagascar. Among the best known examples of this surprising biodiversity are lemurs, over 250 species of frogs, numerous species of chameleons and typical baobabs.